A Deep Dive into Vulnerability Research with Docker and BurpSuite

If you want to skip to the good stuff and just see the "what vuln, where, and how" section, go here

Last week, I discovered multiple vulnerabilities effecting a legacy time management application called PHP Timeclock. Originally developed and released in 2006, the application uses deprecated versions of PHP and MySQL. While official support for the project stopped in late 2013, I found evidence that several major organizations were still using the product. In this article, I’ll describe how I used docker to create a test environment for vulnerability research, and how I used BurpSuite to discover cross-site scripting and sql injection vulnerabilities.

Edit 5/13: I’ve since learned some of these vulns were disclosed in 2015 on cxsecurity but never made it to exploit-db, kudos to the original researcher @Blast3r_ma

I originally found out about PHP Timeclock from some research I did awhile back on a similar application called “TimeClock Software”. In late 2019 I was practicing in the offsec labs for the OSCP course when I found a sql injection vulnerability on a box running TimeClock. I thought this was just a part of the labs until I looked up the version on Exploit-DB. There were indeed SQL injection PoC’s for versions prior, but not the version running in the lab.

My dockerized application did not go to waste, as I decided to turn it into a fun Stranger Things Themed CTF challenge. I’ve since decommissioned the server that it runs on, but if you’re interested in playing it let me know on twitter @tbutler0x90! Its loosely based on Stranger Things and features early 90’s cold-war era goodness 😏. 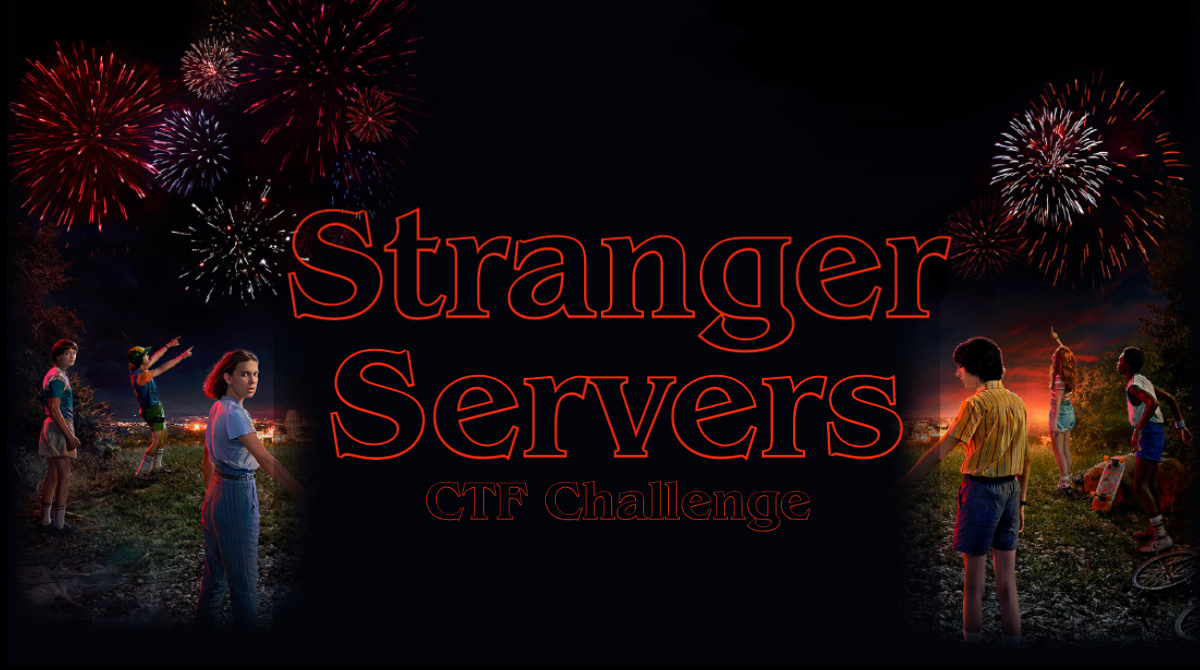 I released the CTF to my 0x90skids ctf teamates. When one of my teamates said he got the flag, I was astonished when he mentioned it was through a path I had not intended. We went back and did some testing, and sure enough he had discovered a 0-day Blind SQL Injection. We put up these findings on Exploit-DB and GitHub.

This brings me to last week. While updating my website I remembered we could never actually find contact information from the Timeclock Software vendor. I thought it would be fun to brush off the OSINT skills and try to look for them. After some digging I was still unable to find the developers, however one thing did keep coming up, “PHP Timeclock”.

After reading through the documentation and the source code, I began to get a hunch that no SQLi or XSS protections were in place. To make matters worse, it was fairly trivial to do some google dorking and find several live production sites using the application. Some quick static analysis of the login function showed that it should be vulnerable to a blind SQL injection. I immediately started a plan to test the app for vulnerabilities .

Since the last official release was in 2006, with some community updates until 2013, I knew that getting a test environment for the app was going to be difficult. I initially started by provisioning an ubuntu droplet on digital ocean and planned on manually installing a LAMP stack. I quickly realized that deprecated dependencies was going to be a problem. I couldn’t even install the right version of PHP from source because the Ubuntu compiler was no longer compatible.

My next idea was to run the application in Docker, however after looking at the official supported docker containers for PHP and MySQL, I realized that they did not have versions old enough. PHP Timeclock relies on PHP < 5.50 as it uses the mysql_pconnect function deprecated in PHP 5.5.0. In addition, several dependencies in MySQL meant that official docker containers were a no go. 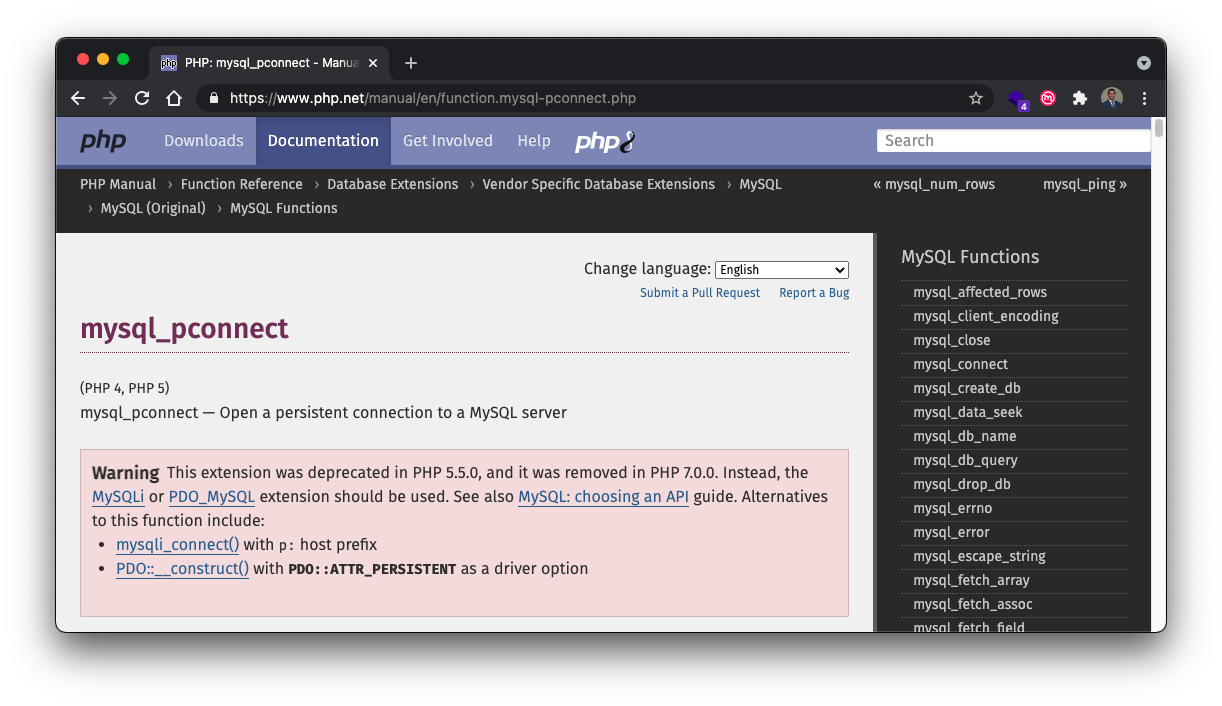 Ultimately, I came across a gimmie in the form of rodvlopes/php4-mysql4-apache2.2-docker , a custom docker container built by rodvlops for this exact purpose. Out of the box, the container builds a PHP4, MySQL4, and Apache2 Lamp stack. Thanks @rodvlopes!

Docker is a fantastic tool for creating test environments for vulnerability research. With simple CLI commands, you can stand up entire technology stacks in minuets. Docker also makes it easy to change versions, so it’s fairly trivial to test applications across a variety of scenarios.

If you’re just getting started with docker, one thing you’ll want to understand is docker-compose. With docker compose, you can set up several docker images at once, and enable port mirroring to expose certain docker container ports with your localhost. For example, when we were initially testing Timeclock software, we needed to set up an environment with a PHP, MySQL, and phpmyadmin. The following docker-compose file can set up all three.

Unfortunately, because PHP Timeclock is so old there were no supported docker images to use. I was unable to use docker compose to set up PHP Timeclock. The setup instructions from rodvlopes/php4-mysql4-apache2.2-docker are a bit more complicated then using a compose file, and involve using dockerfile commands to pass raw instructions to the underlying docker images when it’s being built. This is a bit more complicated then I’m going to get into here, but worth taking a look at if you’re interested.

Even with the perfect docker container, it still took quite a bit of work to get PHP Timeclock up and running. The basic process involved downloading the latest version of PHP Timeclock from source forge, putting it in a location where the apache docker image could find it, and making sure all the images could talk to each other. I’ve updated my github repo tcbutler320/PHP-Timeclock-1.04-XSS-SQLI with the final product. The first time I got it up running I needed to drop into the container with a shell in order to create the database and import the sql config file from PHP Timeclock. The basic steps are more or less the following.

2) cd into the docker folder

4) Run the image, exposing container port 80 to localhost port 80, and puttting the timeclock application in the htdocs folder in the container

Take note here that the file paths are very important. You might find you need to use the root path instead of relative one’s. The syntax is /local/path:/docker/container/path . I ended up not using the /data option, which was created with the idea that you can put a mySQL database extract in that location. Instead, I followed steps 6-9 to drop into the container with a shell and manually import the database

5) Drop into the container with bash

9) populate the database with the sql file

After all that was complete, I was finally able to stand up a local test environment. Now it was time to get started looking for vulnerabilities! 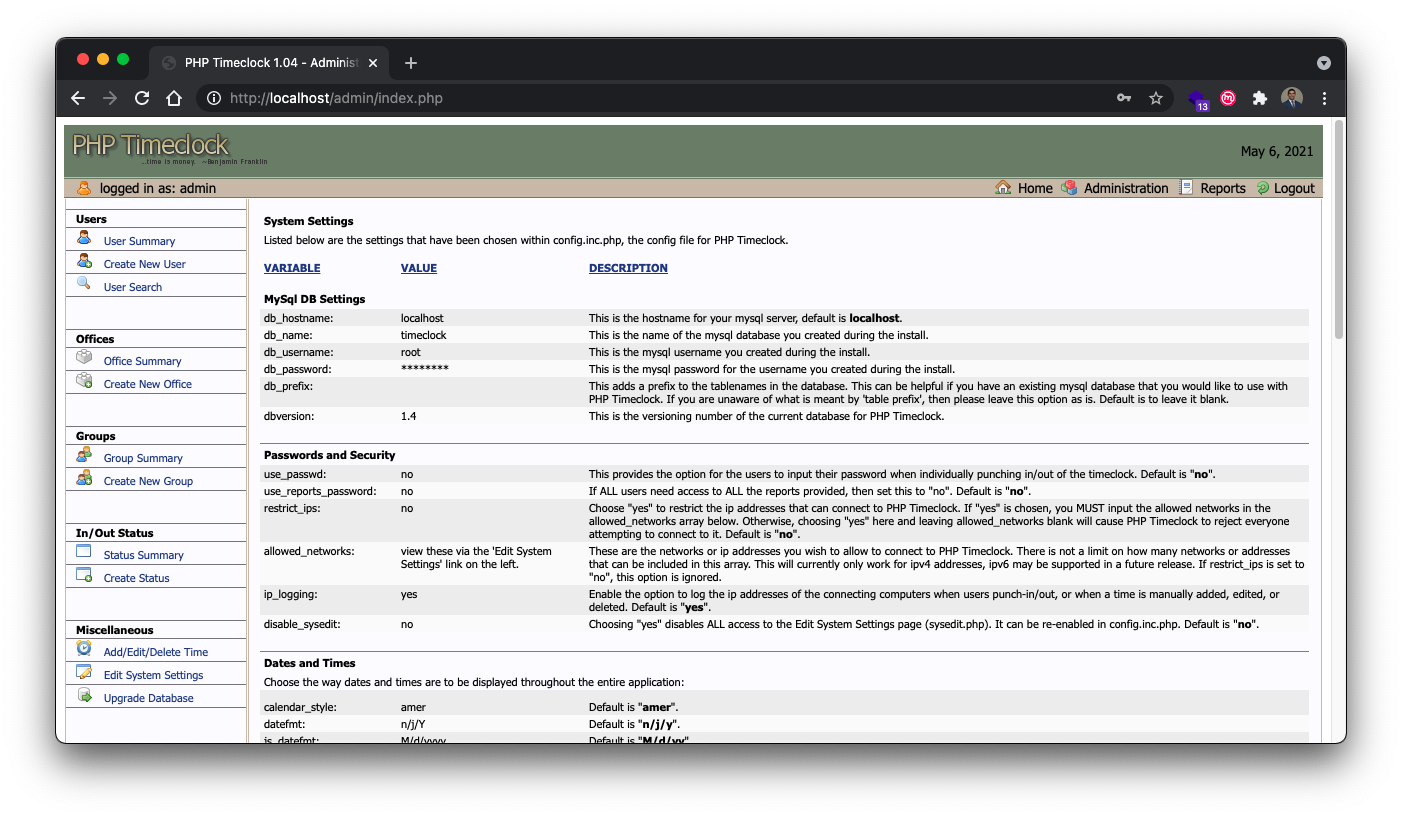 Going into the vulnerability research phase, I was already pretty confident that a SQL injection should be possible. This was based on a brief static analysis of the login function from sourceforge. My research process was essentially 3-fold,

I initially had some isses capturing application traffic with my burpsuite proxy and firefox, but I ultimately solved this by using the built-in chromium browser in burpsuite.

To get the container up and running again after It had been stoped, I started it with docker start [container].

One of the most powerful automated tools in the BurpSuite arsenal is active scan. The scanner can be configured to crawl web applications to brute force directories, as well as full audit functions to search for common vulnerabilities. Using the active scan feature in BurpSuite Professional, I started a comprehensive scan of the localhost application. This is one of the benefits for taking the time to stand up my own docker container, I can be as loud as I want during testing.

Shown in the video below, active scan can be started by;

After waiting for the audit to complete, BurpSuite already found the SQL injection and XSS vulnerabilities. The issues tab shows 3 potential sql injection and 5 cross site scripting injection points. It’s worth mentioning that sometimes these results can be false flags, and BurpSuite will not find all vulnerabilities. In fact, there were additional XSS found during manual testing that were not picked up by the scanner. The next step, manual injection testing, will confirm if these parameter’s are in fact vulnerable. 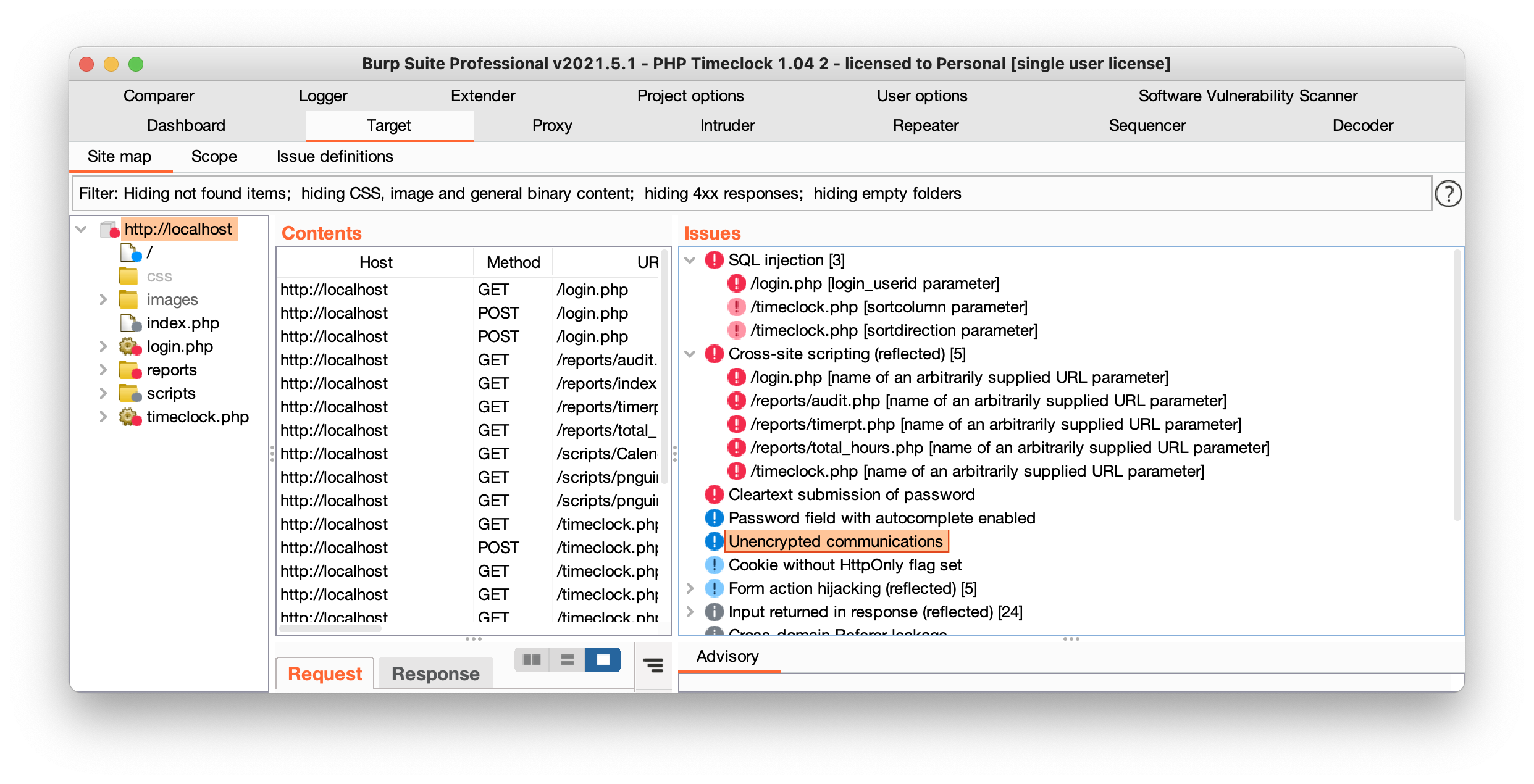 Armed with some basic audit information from the automated scanning, it was time to start manually testing each of the findings as well as other sections. Again we can use BurpSuite to do some of the heavy lifting for us. Once you click on the issues tab, you can open and see the exact request and response from the active scan. I started by testing each of the identified findings manually.

In addition to the XSS, the BurpSuite audit also found two blind sql injection vulnerabilities. Unlike the XSS found previously, blind sql is tough to test manually through BurpSuite. For this task, I will used sqlmap to prove exploitability. You can do this two ways

Shown below, a SQLmap scan proves that the blind SQL injection is valid, and is able to determine the underlying database version. 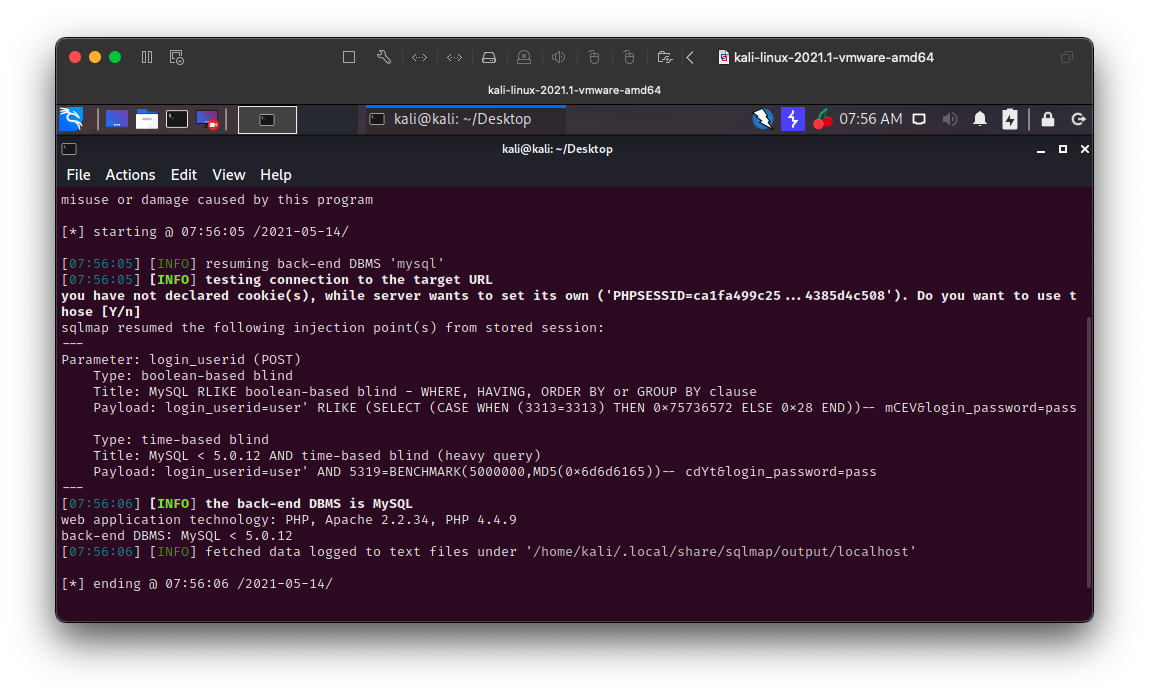 Using automated tools such as BurpSuite and SQLMap is a great way to find vulnerabilities, but conducting static analysis is a much more comprehensive way to discover all possible attack vectors in an application. Once I’ve identified the reason why a certain vulnerability exists, it then makes it so much easier to search through the codebase for similar things.

To identify the vulnerable component responsible for the XSS, lets take a look at the source code for login.php. We know the injection point is in the GET request itself, so this means that somehow the application is taking the full URL or its parameters, and passing it un-sanitized to the login page. Looking at the source code for login.php, we see that a variable $self = $_SERVER['PHP_SELF']; is defined at the top on line 9, and referenced directly in a script tag near the bottom on line 63. According to w3schools, “The $_SERVER[“PHP_SELF”] is a super global variable that returns the filename of the currently executing script.”

Sure enough, if we test the XSS injection again and look at the source using a browser inspection tool, we see that is exactly where the XSS payload is being injected to. 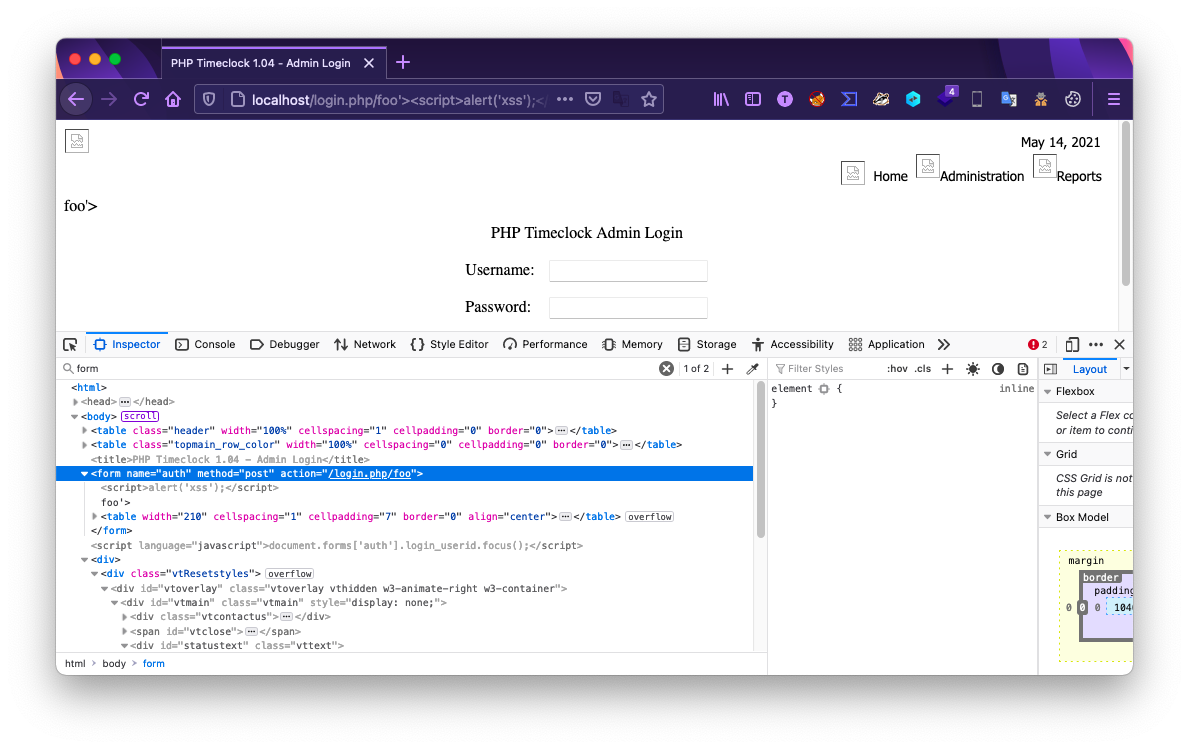 Finally, lets take a look at the SQL injection vulnerability. Similar to before, taking a look at the source code for login.php, we are looking for where raw user input is passed to the application, but this time in a sql statement. Lines 5-7 show the login function is passing the $login_userid variable directly to the sql server. This variable is defined as $login_userid = $_POST['login_userid'];, and therefore is unfiltered user input.